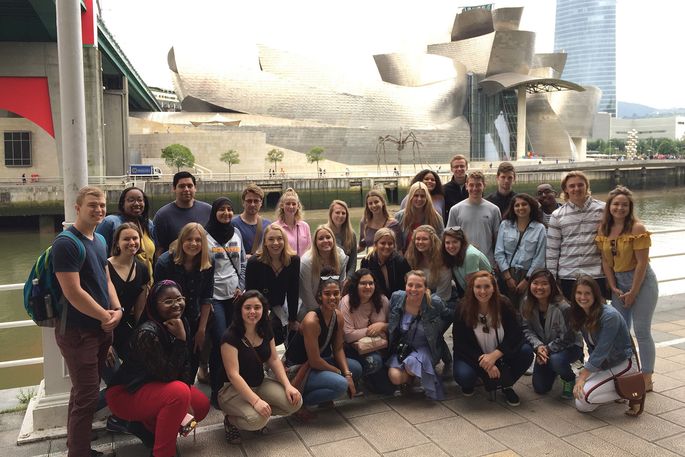 Students will explore the tangled streets, shops, cathedrals, fortresses, synagogues and museums of Toledo, a Medieval walled city, taking notes from poems, stories, and essays as they go. Toledo is a beautifully preserved city on a hill and has been declared, in its entirety, a national monument. The former imperial capital of Spain, Toledo has been, for centuries, a historic, scholarly and artistic center. During the Roman Empire, Toledo was long famed for its religious tolerance, with Christian, Jewish, and Muslim populations coexisting within its walls. Students will now get to benefit from that tolerance by exploring the cultural and religious history of the city.

Why do we travel and what do we gain from visiting cultures and environments that may be unfamiliar? Writing and revising will be emphasized as creative ways of reflecting on the phenomenon of departure and return.

You will live in shared rooms with fellow program participants. A welcome and farewell meal, breakfasts, and some additional meals are included in the program fee. We will take additional meals in the housing or at local restaurants and eateries.

You will spend a week in Toledo, excursions may include:

All program participants will take the coordinated group flight to and from the program site. The cost of the group flight is included in the program fee that will be posted to your student account. Do not book your own flight; you will receive information from the Learning Abroad Center about your seat on the group flight once your participation has been confirmed.

This program is taught by Julie Schumacher, Creative Writing Professor in the English and Creative Writing Departments. Julie is an award winning author and has previously taught a Global Seminar to Spain on creative writing.

This is an on-campus class during the spring semester. On-campus Spring Semester 2022 course meets: Tuesday and Thursdays from 1:00–2:15 p.m. on East Bank. Abroad term: Spring Break 2022

Coursework will include reading and discussions of a wide variety of literature. Assignments will consist of presentations as well as a variety of writing experiments and assignments: the daily post-card, the food review, the creative travel guide, the work of ekphrasis, the annotated map, the daily journal, etc.; culminating in a final reflective travel essay. Assessment will be focused on written form in order to fulfill the writing intensive requirement. Students will benefit from workshops with their peers and individual conferences with the instructor.

Approved for lower division (1xxx-level) elective for the English B.A. and introductory course for the Creative Writing Minor

Submit the online application and complete the assigned application checklist according to the appropriate deadline:

Important Note: This program departs for Spain on Friday, March 4. If you have any class on that date, you may need to miss them in order to travel.

Program dates are subject to change.

If the deadline falls on a weekend, submit your materials on the following business day.

Important Note: Enrollment on this program is limited to 20 students. Admission is granted on a rolling basis and applications are reviewed in the order they are completed. Some programs may fill to capacity prior to the application deadline, therefore applying early is recommended. Additionally, applying early will allow for more time to plan ahead and prepare for the program.

See below for tentative dates and times for your in-person session. You will be notified of the official date and time via email. Participants will receive applicable orientation materials via email approximately 1 week prior to the in-person session.

If you are registered for less than 13-credits, or if you are a non-UofM student, you will be charged tuition for this course in addition to the program fee.  Notify the Learning Abroad Center if this applies to you.

Visit Billing for information about the billing process for application fees, deposits, and program fees.

Bridging Loan, a no-interest/no-fees loan that funds the upfront deposit and flights costs, is available for this program for eligible students.

Before you apply to or confirm your participation on this program, review the Learning Abroad Center's Cancellation Policy to inform yourself of the timeline and financial obligations for canceling.

Be aware: Learning Abroad Center programs require a $50 application fee. This fee will be charged to your student account upon submission of an online application.

Due to COVID-19, current US passport processing times are significantly delayed. If you do not have a passport, or your passport expires less than 6 months after your return date from your time abroad, apply for a new passport now, and pay for expedited processing.

Detailed descriptions and instructions for submitting each checklist item are included on the application checklist assigned to you.

Your participation on this program is secured by applying and confirming through the Learning Abroad Center application process.

You will also need to register for the on-campus course EngW 1911W.

Note: Registering for the course, but not confirming through the Learning Abroad Center, will not hold your spot in the program.

For further information or questions about this program, send an email to